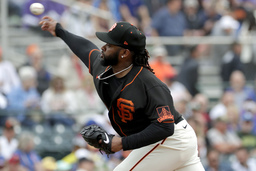 Manager Gabe Kapler made the announcement Wednesday. The Giants are scheduled to open on the road March 26 against Los Angeles at Dodger Stadium.

The 34-year-old Cueto returned last September to make four starts after missing more than 13 months following Tommy John surgery. He went 1-2 with a 5.06 ERA over 16 innings.

An 18-game winner in 2016 during his first season with San Francisco, Cueto signed a $130 million, six-year contract before the 2016 season that runs through 2021. He chose to stay with the Giants after 2017, when he could have opted out.